Diving In Greece: The 10 Best Scuba Spots in Greece 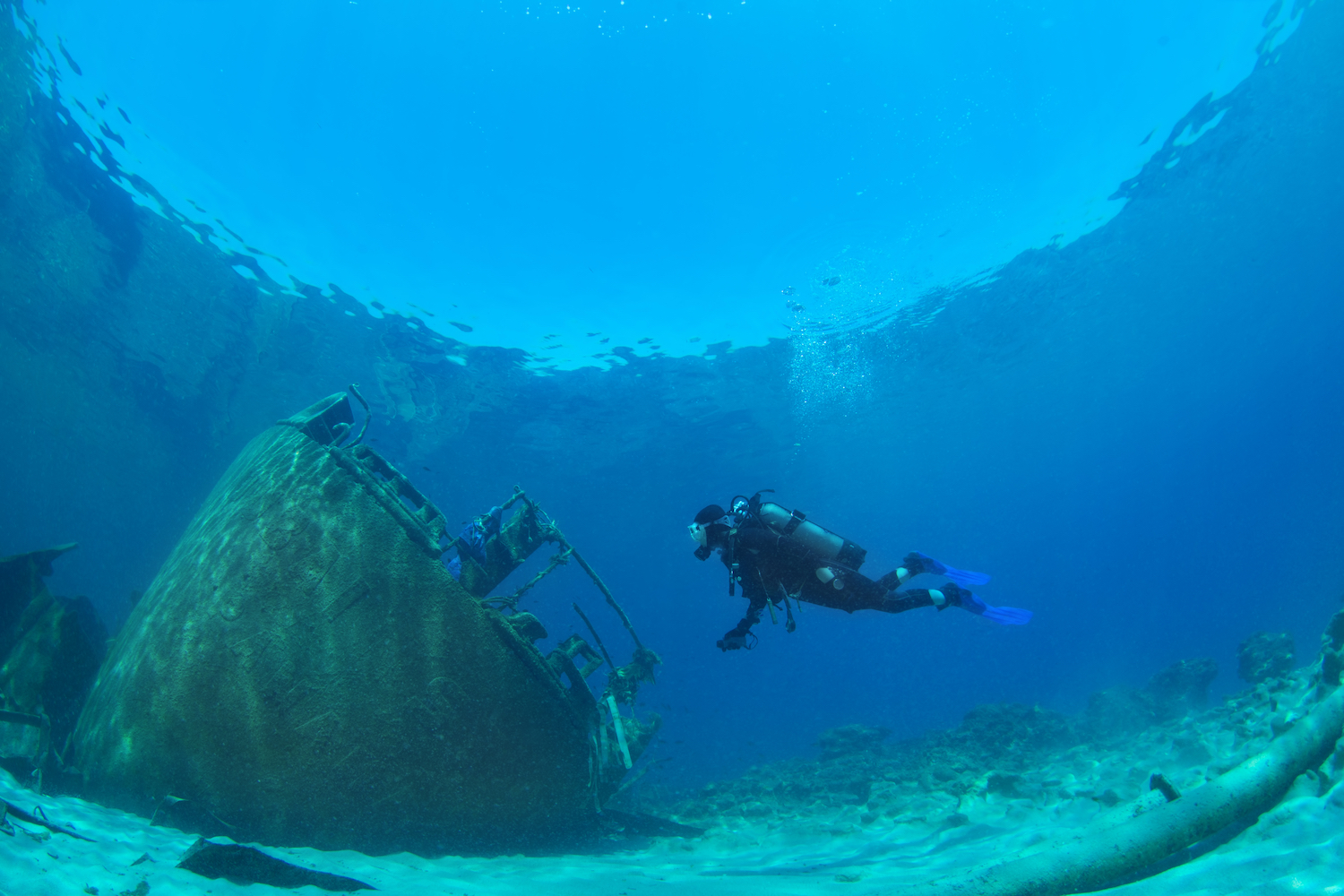 For passionate scuba divers, diving in Greece is one of the top to-do-things when they visit the country. And that’s for a reason.

Greece has one of the biggest coastlines in Europe that stretches over 16,000 kilometers (or over 9,900 miles). This naturally makes it a diving fiesta for divers, both beginners and pros alike.

The Best Diving In Greece

So without further ado, let’s find out which are the 10 best scuba diving spots in Greece and what they have to offer to divers like you.

Crete boasts an amazing coastline which makes it one of the best places for scuba diving in Greece.

If you’re someone that likes to explore the marine life more than anything else, you would really enjoy spending time in Schinaria (also known as Skinaria).

Located to the south of Rethymno, the seabed of Schinaria has a lot to explore for divers, including many different types of morays, octopus and a huge number of other marine species beyond your imagination.

The great water clarity in Schinaria further makes the experience even more enjoyable, making it a dream scuba diving destination.

Talking of clear waters, it’s hard to not think of Paleokastritsa. Located on the north of Corfu, Paleokastritsa offers the clearest of waters you may have ever seen.

The combination of a great visibility and the rocks and reefs coastline paves the way for a perfect scuba diving experience.

If the reefs-filled underwater environment excites you, you would want to head right to the Kolovri Beach, as it features some of the deepest reefs which go as deep as about 40 meters (131 feet). In addition, it also has an underwater archway to add some thrill to the experience.

The Kea island – also known as Tzia – has an interesting underwater history. Back in 1916, the island’s coastline witnessed the HMHS Britannic, a WWI hospital ship, giving in to an explosion caused due to the war and ending up deep in its waters.

The wreckage of what was one of the safest ships of that time still exists in the waters of Kea, and offers an adventurous diving environment to the visitors. However, it’s certainly not for everyone to explore.

The wreckage is pretty complex and very deep, and can turn out to be dangerous for beginner divers. So only advanced scuba divers should consider the Kea as an ideal diving destination.

For those who were disappointed to find that the Kea and the HMHS Britannic wreckage is not for beginners, we have another great and surprisingly similar option in the Nea Kameni.

The Santorini is a volcanic island with some of the best scuba diving options out there. However, the Nea Kameni is the most popular choice, not only because it was a result of a volcanic eruption, but also due to the fact that it too hides a large steel ship in its water in the form of adventurous wreckage.

The Santa Maria was once a 34-meter-long passenger ship that the waters of Nea Kameni swallowed in 1975. However, it’s not as deep as the WWI hospital ship we discussed above, and at 18m, even beginners with a bit of experience would be able to safely explore it.

But the ship wreckage isn’t the only thing you will find in the Nea Kameni waters. There are also mesmerizing underwater lava formations, fascinating rocks and sea caves make for some breathtaking underwater views as well.

Does an underwater cave sound exciting to you? How about exploring the remains of an extinct elephant and also many other animals including the other primeval elephants?

The Elephant’s Cave in Crete offers both these things. It’s a partially filled underwater cave and features some of the most amazing stalactites and stalagmites.

However, the entrance to the cave is only seven meters long and there are some other diving challenges too which means only the more experienced divers will be able to explore this treasure.

The combination of rich marine life and beautiful topography is a rare one, and you will find it in the Mirmigi Reef.

The Mirmigi Reef also features volcanic formations and has reefs in great abundance. Unlike some of the other diving options we discussed above, it’s a great option for beginners as well thanks to the great visibility and relatively limited diving depths.

While Cephalonia has a lot to offer to visitors as an island, it’s actually the wreck of the HMS Perseus that attracts divers from across the world.

The HMS Perseus was a British submarine used in the WWII, which gave in to the waters after taking out an Italian mine. The wreckage of this submarine is fascinating to say the least.

The Chios is a small part of the Aegean Sea and offers so many diving spots that divers will be spoilt for choice.

It’s also one of the most diverse diving options with an amazing reef environment, fascinating underwater caves, rich marine life and, to your surprise, historic shipwrecks.

If you’re a beginner looking to go diving in Greece, you will probably be glad to know that the Chios is just as welcoming to beginners as it to the advanced divers.

The island of Marathonisi which is off the coast of Zakynthos is uninhabited by humans, but home to a large population of loggerhead sea turtles.

If you have seen too much of the usual marine life, the Marathonisi will be a welcome change for you. Its loggerhead seaside turtles are unique in their own sense, although there’s also a great diversity of other marine life.

Another ideal wreck diving spot for the advanced divers. A 62-meter-long cargo ship named Anna II sunk in the Mykonos, and the wreck is still in a fairly good condition which makes for an even more exciting diving experience.

The surrounding area isn’t bad either, with some amazing views and a great diversity of reef for diving in Greece.