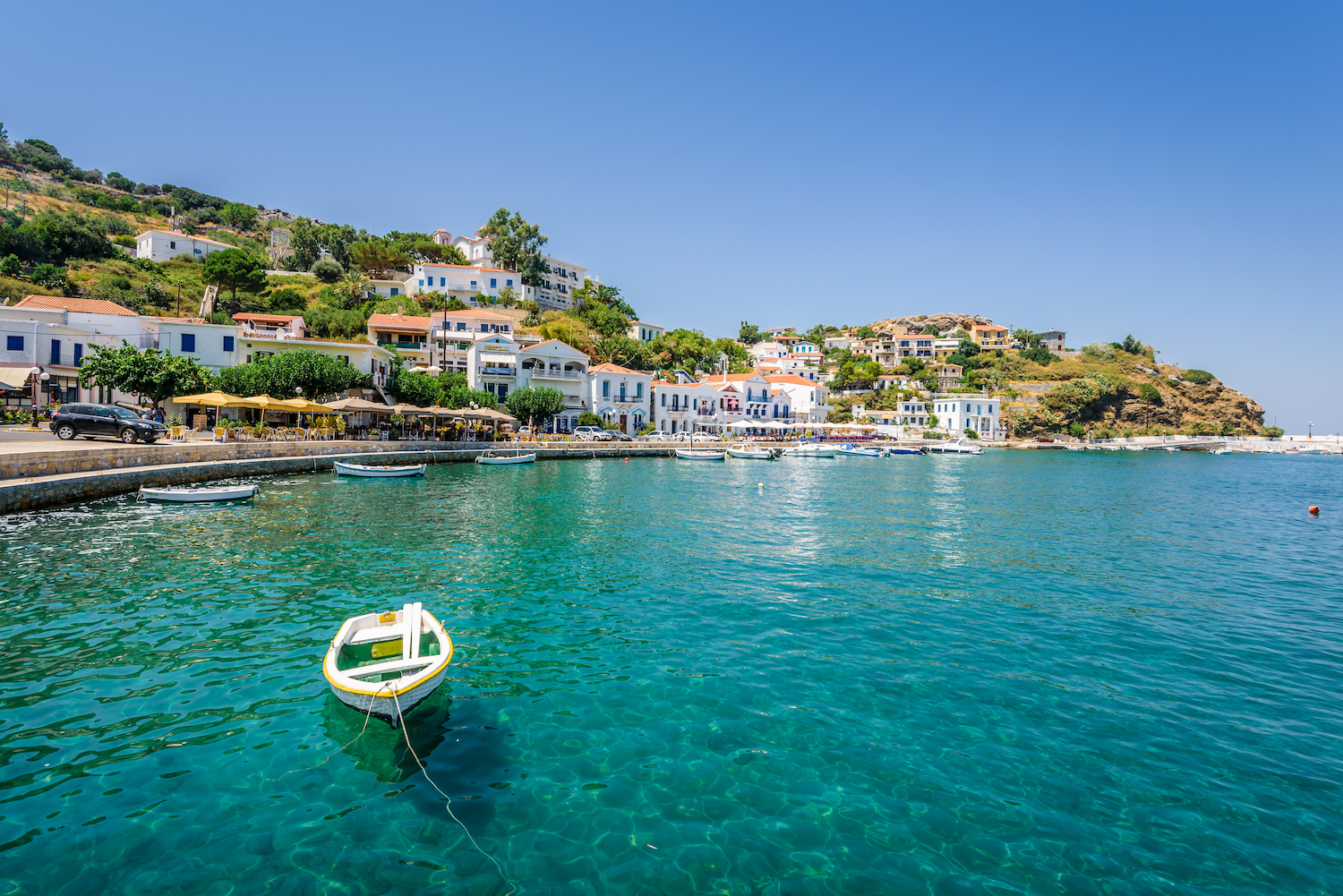 Greek waters have been attracting travelers from across the world since 3500 BC. However, you certainly do not have to go through all the challenges that travelers of that time had to, particularly including the world’s first tourist Odysseus.

When Odysseus set out to explore the Greek islands, he was faced with many challenges so grave that the entire journey posed a risk of him drowning into the Greek waters.

However, traveling the Greek waters is a much safer and pleasant experience now, where you do not have to follow the schedule set by Zeus like back in Odysseus’ days. So let’s jump into the “waters” and guide you on sailing the Greek waters with extensive information on Greek island cruses.

There are different itineraries for traveling the Greek waters but they all only last up to 10 days, except a few that run longer.

Some of them are round-trip cruises that have the same start and end destination in Piraeus. However, some others that begin from Piraeus end in Istanbul. There are also some that begin in Venice and end in Piraeus.

The major difference between the different types of cruises is the area they cover. Some only concentrate on covering the Greek islands, Turkish coast, Israel, Cyprus and Egypt.

However, some other cruises focus on a very different route starting from Gibraltar and covering the western Peloponnese, Ionian isles and Athens.

If you want to visit the top sights Greece has to offer, you would want to choose an itinerary for Greek island cruises that covers the following:

Something to note here is that there’s no place to stay in Delos as no one is allowed to stay there overnight, so you will only be able to have a day trip there.

The port calls may vary depending on the cruises, as some have port calls at Itea and Katakolon with excursions to Olympia and the Temple of Apollo at Delphi, while some others have their calls at Nafplion and Epidavros.

With the latter, you also get to visit the ancient theatre as well as the citadel of Mycenae, or other places of historic and religious significance.

Some of the cruises are also a bit flexible about where you can spend your extra time, with some even letting you stay overnight in Mykonos to visit the party scene, or visit the Santorini island if you want to explore the island more comfortably after all the cruise crowd has left.

If you think it doesn’t matter what time you choose to visit the Greek waters, think again. The timing of your cruising can make or break your experience.

But the options are not limited at all as the cruising season lasts about 9 months from March to November. However, the period from July to August is the peak cruising season, so you will find pretty much every sight or attraction crowded during this time.

In addition, the sun may get a bit too hot for some people that are not used to high temperatures.

Your best bet would usually be May, June, September, and October. These months will be just about warm enough to create a perfect environment for swimming and sunbathing, but wouldn’t get uncomfortably hot at any point.

But the advantages of cruising in these months don’t there. You also get discounted fares, better availability in ships, and the ports and islands are much less crowded, among other benefits.

The ports cruises tend to visit vary significantly from one another in terms of size and popularity, and some of them require cruises that arrive on a large ship to take a small tender before visiting them.

It’s also important to plan your day well before you visit a particular port, as in some of them the main attractions are at least an hour away by car or bus. However, you would almost always also have the option of just relaxing at a nearby beach instead of going exploring the port.

That said, let’s discuss some of the best ports to visit on a cruise in detail below.

This port town has a charm of its own. It’s a perfect place to feel “away” from the modern world, with bare mountains, small gorgeous islands, and being surrounded by the deep blue sea.

The views are magnificent from the town’s hilly streets with a “bottomless” lake at the core.

It’s one of few ports you would visit without any beaches, but there are a few bays that more than make up for it. The architecture you would see when roaming around on the streets would have a hint of the Venetian and Byzantine influences.

This city would take you even further back in time with its elegant eucalyptus-lined avenues and the Venetian and Ottoman homes lined with the shady alleyways.

The waterfront promenades are an attraction in itself, too. However, some of the main attractions have a history to tell, with the waterfront Firka Fortress, which now features a maritime museum but was once a Turkish prison.

The same goes for the Turkish mosque of the historic times which is now used to host art exhibitions. You would have more to explore in Agia Triada, an ancient home to several monasteries, which is also famous for its location as it extends into the sea from the east of Chania.

Then there’s also the main beach located just a few minutes away from the harbor. Once you somehow convince yourself to leave all the sights you find here, you can depart for Samaria in a bus to witness the amazing gorge cutting through the Crete’s mountains.

It’s the island which used to be home to the British, French and the Venetians. While it has changed significantly from those times, it hasn’t lost all its glorious past.

You can find some of the best historic monuments here, while it also boasts a stunning natural landscape, along with bright, clear seas and a great weather all round the year.

The streets are narrow and winding, and the center of the town is full of English Georgian and Venetian houses.

If you’re an art lover, you would find the sights in the archaeological museum mesmerizing.

This is another small island that will make you feel as if you have landed in an entirely different world. It’s just a short boat ride from Mykonos, a popular destination for most cruises.

It used to be a holy sanctuary for as long as a thousand years, but is now only an archaeological site that the Greeks are working hard to preserve.

If you’re not in a hurry, then a trip to the Temple of Apollo, the Sacred Way and the imposing Avenues of Lions would be worth your time as well.

The Gythion is another small port but is known for being in a unique cultural and geographical area known as the Mani.

Tourists often find the seaside cafes and beaches to be worth a visit in this port.

One of the main highlights are the underground boat tours, which take you to the Diros caves. Some of the tours also take you to other Peloponnese towns with a lot of history and gorgeous sights including Sparta, Mystras and Monemvasia.

Cruises cover this port so that their tourists can visit the nearby attractions connected to it, which include the Minoan king’s residence, the religious center for the region, as well as the Palace of Knossos.

The center of this port is home to the Archaeological Museum of Heraklion, which houses some of the most ancient artifacts from the Minoan culture that the Greeks consider themselves fortunate to discover when excavating the Knossos.

Just walking on the streets of the capital would present you with many interesting sights too, including the Venetian buildings, promenades and outdoor cafes. Most tourists also don’t fail to take a trip to the inner harbor of the port to visit the Koules, which is one of the largest fortresses you will ever see in your life.

This port is often also referred to as “the door to Olympia” as it has the shortest distance of all ports to the Greek city popular for having the most important sanctuaries found in ancient Greece, which is where the ancient Olympic games were born.

The remains of the incredible stadium that could house 20,000 spectators at a time could still be found today. The Katakolon has an archaeological museum too, but it’s different in the sense that instead of artifacts or other similar art elements, you would find classical, archaic and prehistoric statues with a great history and an ancient feel to them.

It is a place that offers the most unique of glamour in the most simplified manner. The cruise ships drop you at Tourlos, and then the shuttle boasts take you to the main town of Mykonos.

It’s a whitewashed Cycladic village with winding, narrow streets, and offers a lot to do both during the day and nighttime.

Some of the biggest highlights include the Panagia Paraportiani, one of the most popular and most photographed churches in the world, and Little Venice, the gorgeous waterfront district of the town.

Mykonos is also known for its parties, and many tourists stay here overnight to enjoy its nightlife.

This is a popular port located just 11 km away from Central Athens. Getting to all the important sights in this port is easy, as traveling in the metro or a taxi is convenient and quick.

The Acropolis is one of the most significant places, as it has still kept the ancient part of the modern capital intact. The next worthy sight would be the Odeon of Herodes Atticus, which is a stone theatre and a magnificent work of the ancient times.

From there visiting the heart of Old Athens would only be a quick walk, and you will get to visit the bazaars of Monastiraki and then Plaka, a place with a village feel and island vibes.

As you go north of Plaka, you will end up at the ancient Agora, which is also known as the birthplace of democracy in the country.

The amazing collections at the Benaki Museum, the Acropolis Museum, and the National Archaeological Museumdemand demand a visit too, and so does the parliament in the central Syntagma Square, which was once the King Otto’s royal palace.

If you do decide to go there, you will be able to witness the popular sight of the Changing of the Evzone Guards, which takes place at the Tomb of the Unknown Soldier.

When we said the Rhodes town has so much to offer that you will be spoilt for choice, we really meant it. There’s indeed a lot to do in this town.

The best thing to do, however, is to visit the Acropolis of Lindos and experience the Greek history at its best. The battlements, ancient walls and a unique temple all take you back in time. The view from up there is really hard to define too.

Other attractions worthy of your time include a trip to the Symi Island which is only a short boat ride from Rhodes, visiting the historic old Rhodes town, exploring the Palace of the Grand Master and spending some time at the Saint Paul’s Bay to relax yourself while enjoying from breathtaking views right in front of you.