Ultimate Travel Guide to the Island of Paxi 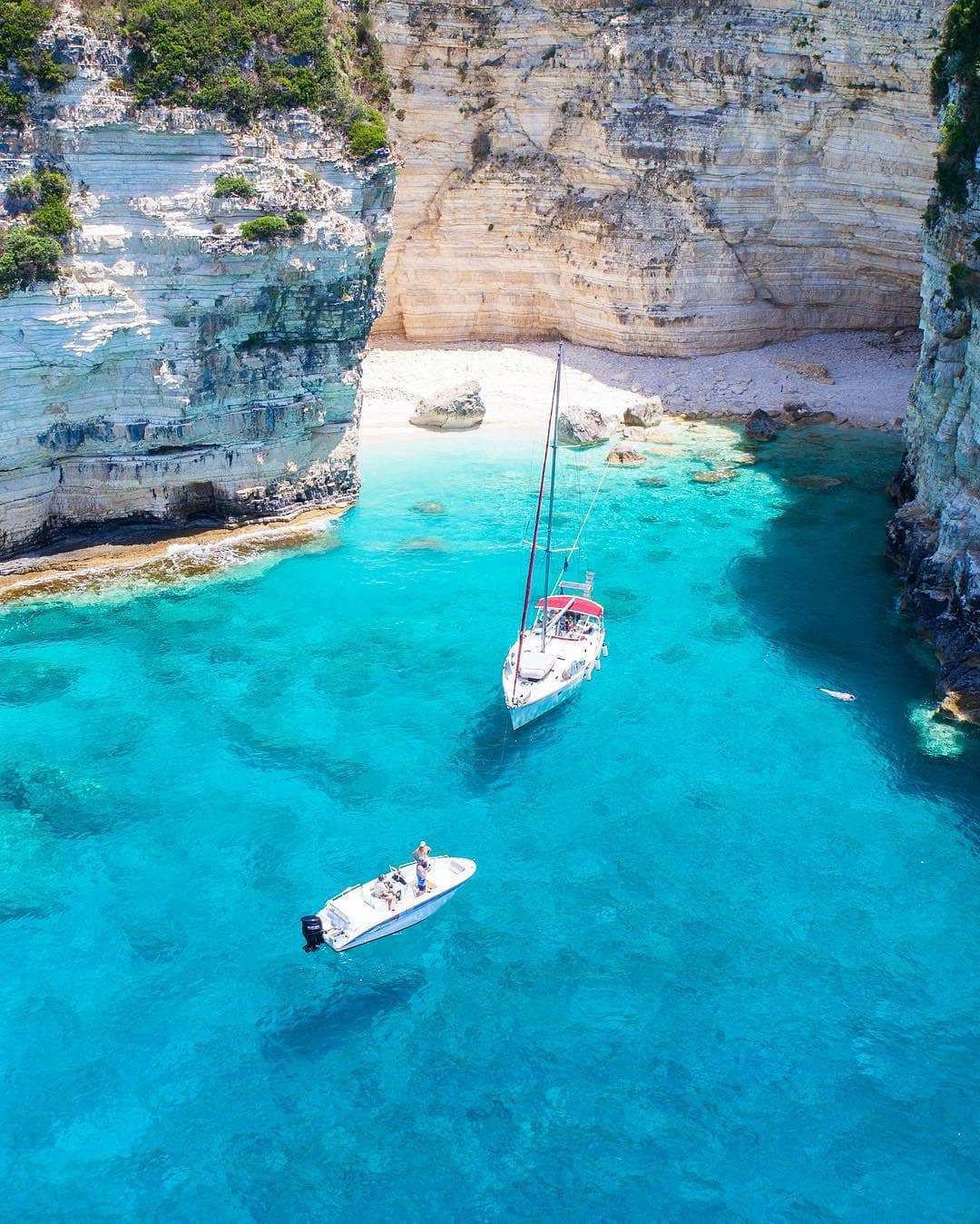 If you’re looking for an exotic vacation destination that will allow you to completely relax and unplug from the hectic pace of daily life, start making plans to visit the Paxi islands. This tiny, remote island set in the northern Ionian Sea is one of the most pristine locations in Greece. With just three main villages—Gaios, Lakka and Loggos—and a handful of smaller ones, Paxos is a place to truly get away from it all.

Summer is definitely the ideal time to visit Paxos. During this tourism “high season,” all of the island’s shops, restaurants, tavernas and other attractions will be operating at full steam, giving you maximum options for sightseeing and entertainment. The weather will be sunny and hot—perfect for sunbathing, swimming and diving along the island’s beaches. Due to the island’s size and remote nature, summer crowds will be much more manageable than most of the other popular Greek islands, such as Santorini and Mykonos.

At just over 12 square miles, the island doesn’t have an airport, so the only way to get there is by ferry from Corfu, a larger island approximately seven nautical miles north of Paxos. During the busy summer tourist season, many airlines offer direct flights from major European cities to Corfu, but during the low season, travelers typically have to fly in from Athens. Upon arriving in Corfu, you’ll need to take a taxi to the New Port to catch a hydrofoil or ferry to Paxos. One-way trips usually take 60 to 90 minutes and cost 10 to 20 euros.

Places to Stay in Paxos

As the island’s capital city and main port, Gaios offers visitors the most options for lodging, dining and other activities. However, hotels and private villas are also available in Lakka and Loggos.

The spacious apartment-style accommodations at the Adamantia Hotel provide both privacy and flexibility for guests. The 12 stone houses blend traditional Ionian architecture with modern comfort, and the property is less than a mile from the beach. All cottages have their own private terrace and can comfortably sleep two to six adults. Amenities include air conditioning, small fridge, satellite TV, free Wi-Fi and hydromassage shower.

Boasting incredible views of the turquoise sea, this family-owned hotel in Lakka was recently renovated to deliver the highest-quality accommodations and service to its guests. Standard rooms are equipped with soothing light-wood furniture and soundproof windows to ensure a peaceful, relaxing atmosphere. Amenities include air conditioning, flat-screen satellite TV, fridge, Wi-Fi and free breakfast, making this hotel an outstanding value for travelers. Several studio apartments are also available for larger groups or longer stays; these include a kitchenette and private patio or balcony along with the standard amenities.

The three apartments, villa and studio that make up the Kanoni Beach Apartments complex all feature private terraces with excellent sea views along with a seating area, kitchenette and air conditioning. The property includes a pool, communal BBQ area and free parking.

Nestled in a verdant valley on Paxos’ east coast near Loggos, the Glyfada Beach Villas feature beautiful sea views in a quiet setting. Surrounded by olive groves, the villas are within walking distance of both Monodendri and Glyfada beaches, and two onsite swimming pools provide additional options for recreation and relaxation. Each of the 17 villas include air conditioning, sitting room and kitchenette with sink, refrigerator and coffee station. Comfortable furnishings, large windows and stone floors complete these elegant accommodations.

How Long to Stay in Paxos

Given its small size, activities on Paxos are somewhat limited, so if you’re the kind of traveler who loves constantly exploring and seeing new things, you’ll probably want to limit your stay to four or five days before hopping to another island or visiting the mainland. However, if you’re simply looking for a peaceful place to relax and decompress in a stunning natural setting, you could easily spend a week or more here.

With most of the activity on Paxos concentrated in the three main town centers, you can easily see many of the island’s sights on foot. To travel among the villages, the island’s five taxi services are relatively inexpensive, and all of the drivers speak English. The public bus system’s routes run between Lakka and Gaios with a stop in Loggos, but if you want to see the smaller villages, you’ll need to take a taxi or rent a bicycle. This site is a good resource for information about transportation on Paxos.

Things to Do on Paxos

Named for St. Gaius, who arrived on the island in the first century A.D. to share the newly-founded Christian faith, Gaios is the island’s capital city and main port. It’s also the hub for most of the island’s shops, restaurants, government services and utilities.

Located at the island’s northernmost tip is Lakka, a former fishing village with a horseshoe-shaped bay.

On the east coast of the island, Loggos is the smallest of the three main towns and features excellent views of the Greek mainland. Also a former fishing village, the town retains much of its old-world charm thanks to the pastel-hued houses that line the harbor, and its defunct soap factory and weathered windmills have set the scene for several movies and TV shows set in Greece.

Located along the island’s public bus route, Magazia is a quaint village that’s home to several interesting historical sites, including a few ancient wells and cisterns and three graves dating back to 600 B.C. Just outside the village, the Olive Press Museum features an original stone press from the mid-19th century that remains operable today.

You’ll step back in time when you visit Fontana, one of the smallest villages on Paxos. You can admire the lovely old houses and town church, get a bite to eat at one of the charming tavernas and stroll the rustic streets for a brief escape from the hustle and bustle of modern life.

This tiny sister island to Paxos is just two square miles in area, but its vast sandy beaches and shimmering blue waters draw thousands of visitors each year. Speedboat taxis travel frequently between Paxos and Antipaxos, making the diminutive island a perfect place for a day of swimming and lounging on the beach. Bring a sturdy pair of shoes for navigating the rolling hills through the orchards, vineyards and gardens and climbing the rocky cliffs at Radovani Beach.

Places to Eat in Paxos

Paxos is home to a few dozen restaurants and tavernas, most of which are concentrated in the three main towns, although smaller villages typically have at least a taverna or two if you find yourself in need of sustenance while out and about.

Giappy Café on the harbor in Lakka is a delightful place for enjoying a light breakfast or sweet treat. The menu includes coffee, fresh juices and smoothies, sweet and savory crepes and waffles as well as lunch sandwiches and wraps.

Enjoy some of the best views in Gaios when you visit Genesis, a modern Mediterranean restaurant that sits directly on the arbor adjacent to the famous “Green Man” statue. The extensive menu includes fresh seafood, grilled meats and traditional favorites like moussaka and risotto. End lunch on a sweet note with classic loukoumades (Greek doughnuts with honey and walnuts) and a cappuccino.

Located in Gaios, Carnayo emphasizes quality over quantity, with a brief menu of Mediterranean-influenced dishes centered around local flavors and influences. The upscale stone-and-wood interior creates a cozy environment for enjoying specialties like ceviche made with freshly-caught Ionian seafood, local limpet risotto and lamb keftiko—spit-roasted lamb, grilled vegetables and feta cheese baked in flaky, buttery phyllo dough. The wine list includes a well-rounded selection of local and international varieties, and everything from bread to sauces is prepared fresh in-house.

The friendly staff at Gelato Italiano in Lakka serve up creative flavors of freshly-churned gelato, ice cream and frozen yogurt—the perfect refreshment for a warm summer day spent on the beach.

While glamorous Cycladian islands like Santorini and Mykonos get most of the headlines, Paxos is a peaceful and picturesque island escape and one of the best-kept secrets in Greece. If you want a relaxing seaside vacation without crowds and constant activity, consider planning a stay in Paxos.