What is the Best Time To Visit Santorini Greece In 2021? 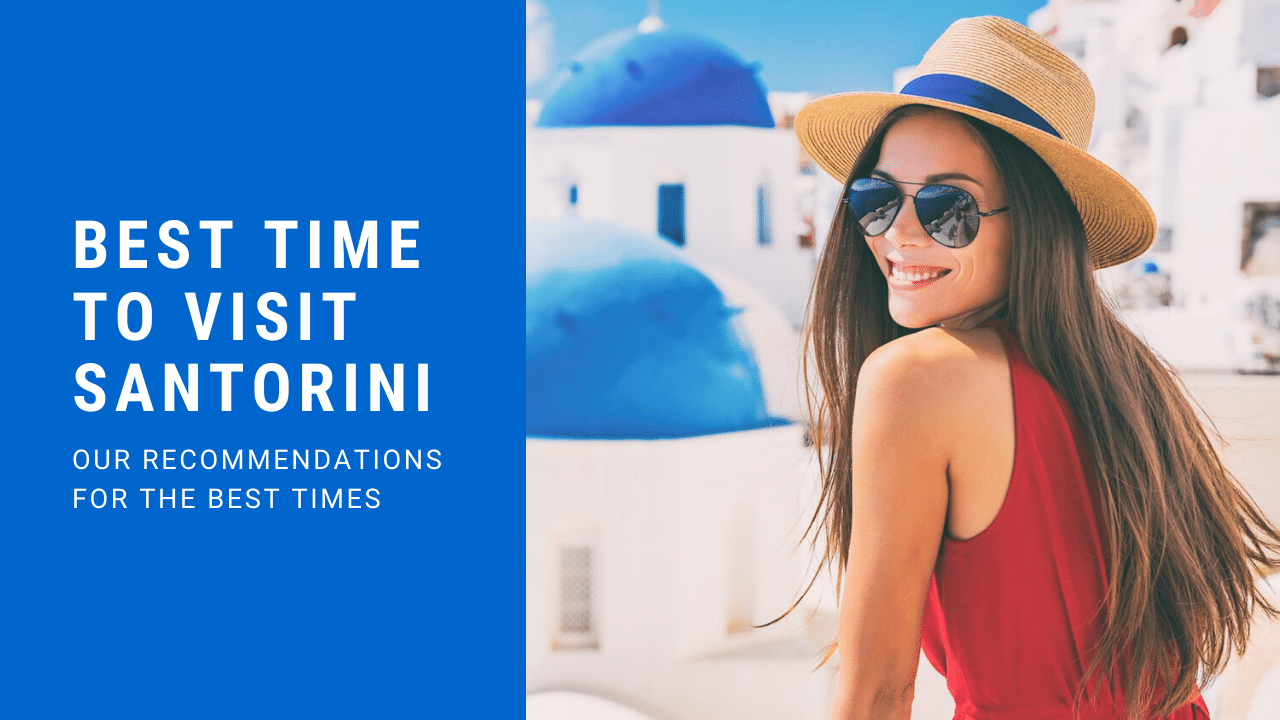 Santorini is a precious gem of the Aegean sea. Santorini is an archipelago or group of islands consisting of Thira, Thirassia, Aspronissi, Palea and Nea Kameni in the southern part of the Cyclades.

The Santorini islands came into existence as a result of volcanic activity and they still sit on top of an active volcano today. There is nothing to worry about. The volcano last erupted 3,600 years ago and it is closely monitored.

The Santorini islands are the perfect place for a getaway in Greece. Enjoy the exquisitely clear waters, volcanic beaches, and explore the island towns perched on the side of cliffs.

If you are looking for a romantic getaway or a family vacation Santorini has something to offer you. This helpful guide will describe the best time to visit Santorini so you can enjoy all the islands have to offer.

What Is The Best Time to Visit Santorini Greece

Simply put the best time to visit Santorini is between September and October and April to May. This is when the weather is warm and the crowds are scarce. If you are looking for hot weather, nightlife, swimming, and sunbathing visit in June through early September.

Like all of the Cyclades, Santorini welcomes the most visitors during the summertime. You may need to make reservations months in advance if you plan on visiting during the peak months of summer.

For comfortable sightseeing and moderate temperatures book your trip from March to May or Early October to December. If you are looking for a bargain visit Santorini in the winter. During the wintertime, the season’s average high is only 50 degrees Fahrenheit and the islands receive lots of rain. However, the room rates plummet and the season does make very pretty scenery. The crowds are generally low until May when most guests come for the sunnier weather.

The weather is one of the many reasons people flock to Santorini. Like anywhere else it has its ups and downs. Sometimes the same month next year can be different. Keep this in mind as you plan your trip to Santorini in 2021. In general here is what the weather is like month by month.

If you are planning a beach vacation the best time to visit Santorini is between June and early September when the weather is hot and sunny. The water is in the upper 70s and perfect for swimming. The water is the warmest in August and September although sometimes you can find nice weather for swimming continues into October or a month earlier in May. It’s happened before but it’s not a guarantee.

The Santorini beaches are mostly along the southeast coast. A long black strip of volcanic sand runs from Kamari to Perivolos. This is a popular beach destination. On the western side of the island is the flooded volcano crater. It is one long crescent, almost a vertical cliff. There are a few beaches on the northeast side and southwest butt hey are very small. These beaches don’t have access to facilities like the beaches on the southeast coast.

There are many different attractions to visit in Santorini. Santorini itself is a beautiful, unique sight to behold. Santorini has beautiful churches built int the Cycladic style with whitewashed walls and blue domes. Visit the Monastery of Prophet Elias and get better acquainted with the rich cultural history of the islands.

There are many great museums and archaeological sites. You can visit the ruins of the five Venetian castles and Akrotiri Lighthouse. Take in the majestic views, the beautiful water, and spectacular sunsets.

If you are traveling to visit the sights, the views, wineries, food and beautiful sunsets then you don’t need hot weather but pleasant weather. We recommend visiting in late March, April, May, October, and November. These are great times to visit the island.

There may be light rain so pack a raincoat and some warmer clothing. The weather during these times is still considered warm and enjoyable by most standards.

If you are planning on visiting Santorini during an island-hopping vacation there are many great times to visit. Santorini has several diverse attractions making it possible to enjoy a vacation here outside of the main summer months. Add Santorini to your list of places to visit during your island-hopping vacation in March, April, early May, late October, and November. These quieter months are a great time to see the islands and miss the crowds.

Other surrounding islanders are usually less crowded at this time as well so you can group a few together that you would like to visit.

Santorini on a Budget

If you are primarily looking for a great deal, consider visiting Santorini during the low season November through March. This is the best time to visit Santorini if you are on a tight budget. Transportation, food, and tour prices do not vary much from season to season but hotel rates will go down.

If you want great weather and a cheaper hotel, travel in late May, early June, late September or early October. The first couple of weeks in October can surprisingly bring beautiful weather durian some years.

To save money on travel to Santorini consider booking a flight to Athens and then taking a ferry to Santorini. The boats in Greece are comfortable and a safe way to travel on a budget.

When you book a hotel on Santorini take a look at hotel options in Fira instead of the touristy city of Oia. Fira has great restaurants and bars. It may not be as “glam” as Oia but it is more affordable.

Traveling to Santorini During Winter

With each year travel to Santorini during the winter months is gaining in popularity. When you visit Santorini in December, January, or February you are likely to find moderate weather compared to Northern Europe. There will be some rainy days and partly cloudy days.

Santorini winter weather is perfect for walking, photographing, sightseeing, and exploring the island. Many people love to visit Santorini during the quieter months when you feel like you have the caldera and sunsets all to yourself.

If you decide to travel to Santorini during the winter make sure you pack warm clothing. You will need long pants, sweaters, and a rain jacket. Also, throw in a pair of shorts because there may be a few warmer days mixed in. Many of the hotels have heated pools so bring your swimsuit.

In 2019, around 150 hotels were open year-round, Five years ago that number was around 30 hotels. Plenty of restaurants are open in the main towns. Nightclubs close down in late October, early November for the year but their many good bars to choose from.

The winter does seem warmer and sunnier here than it uses to be 10 years ago but come prepared for anything. It does occasionally snow in Santorini (about once every ten years) although there is very little accumulation. If it snows that usually takes place in January or February.

Santorini can indeed get quite crowded. If you are looking for a vacation that is more relaxing and less crowded travel during off-peak seasons. Here is a breakdown of Santorini crowds per month.

Plan Your Trip to Santorini for 2021

Now is a great time to plan your trip to Santorini for 2021. Take advantage of this helpful guide when deciding which time is the best time to visit Santorini. Depending on the activities that you want to partake it may be best for you to travel during the off-peak season.

Read our Ultimate Travel Guide to the Island of Santorini and learn about all of the activities the island has to offer. Happy traveling!