Spending Christmas in Greece: Where To Go, What To See 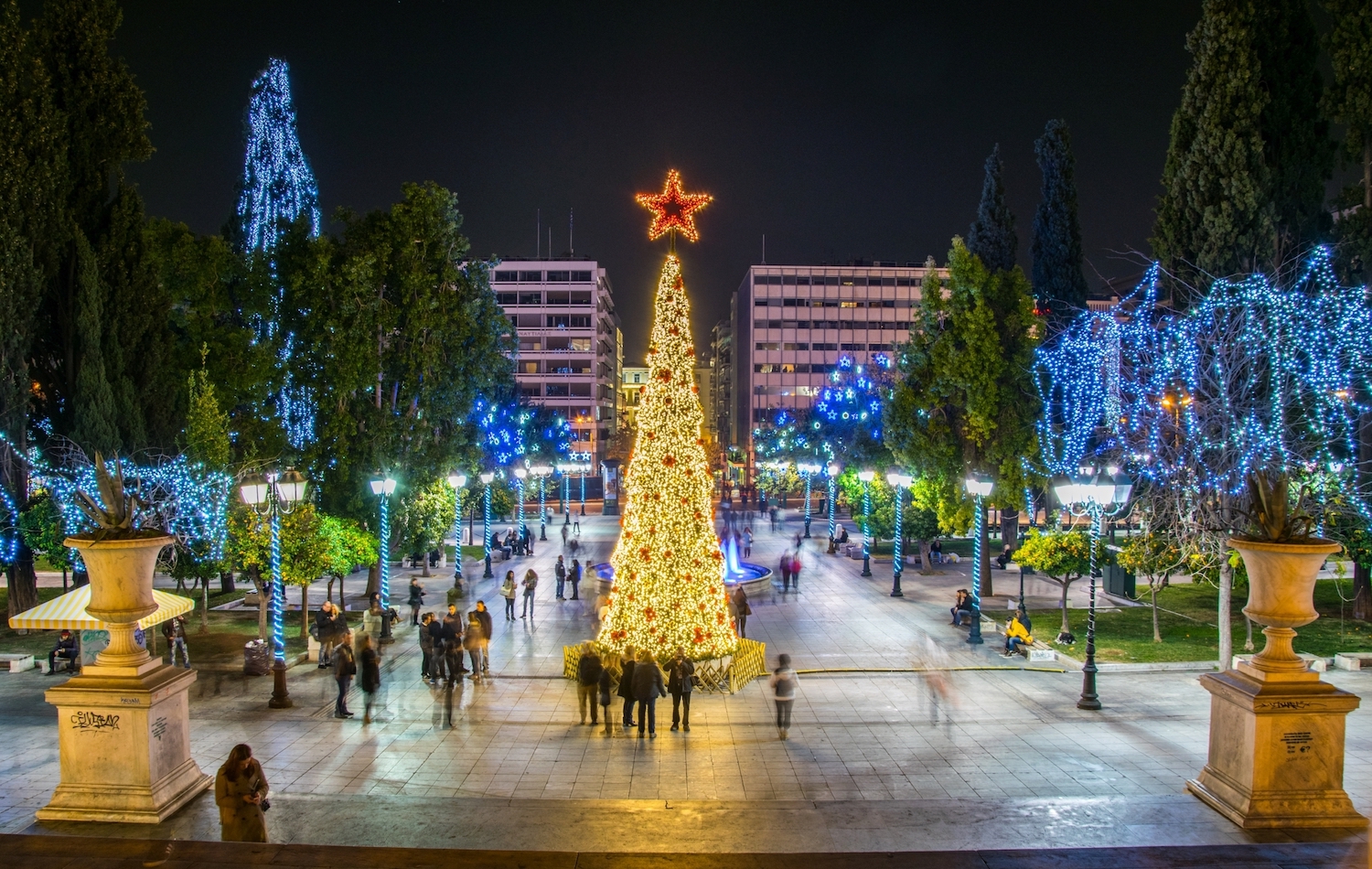 If your winter travel plans include visiting Greece during the Christmas season, you’re in for a magical trip. From brightly-decorated trees and miniature Christmas ships to charming seasonal traditions, your holiday in Greece may be the most memorable and festive Christmas of your lifetime.

Christmas in Greece is a multifaceted celebration, rich in both religious meaning and secular traditions. The season begins on December 6, St. Nicholas Day, who is not only the saint most closely associated with Christmas, but also the patron saint of sailors—a cherished figure in this nation of more than 6,000 islands. The Christmas season officially ends on January 6 with the Feast of the Epiphany, although festivities may stretch into the middle of January in some areas.

In honor of St. Nicholas, the protector of sailors, boats called “karavakia” are commonly incorporated into Christmas decorations and are often just as visible as the traditional Christmas tree. Model boats of all sizes pop up across the country, usually festooned with twinkling blue and white lights.

Christmas caroling is a popular holiday activity in Greece, with roving bands of singers primarily concentrating their activity on three significant dates: Christmas Eve, New Year’s Eve and the Eve of the Epiphany (January 5). Traditionally, groups of children will visit houses in their neighborhoods singing holiday tunes accompanied only by a triangle; they are often rewarded with a small sum of money from the residents of each home.

According to legend, the 12 days of Christmas—in Greece, the period from December 25 to January 6—draw out naughty goblins called “kallikantzari” who roam Greek towns playing tricks on people—typically overturning furniture and stealing their food. As the story goes, these ugly but harmless creatures enter homes via their chimneys, which is why many Greeks keep their fireplaces continually lit during this period. Some people will even sprinkle holy water throughout their homes to drive the goblins out.

During the Christmas season, you may see a pomegranate mounted above the front doors of some homes. At the start of the new year, the fruit has dried; residents then hurl it to the ground and step over the smashed fruit and into their homes to start the new year on the right foot. This tradition is said to bring good luck in the year ahead.

In Greece, children have to wait an extra-long time to open their presents. Gifts are distributed on New Year’s Day in honor of St. Basil (“Father Christmas”), and everyone named Vassilis (the Greek translation of the name Basil) or Vassiliki (the feminine version) gets to celebrate his or her “name day” as well.

If you’re religious—or simply enjoy experiencing different religious traditions—you’ll be right at home in Greece during the Christmas season. Greek Orthodox churches, which are beautiful and fascinating to visit at any time of year, are filled with light, life and music during the holidays. The faithful mark the start of the season on December 6 with St. Nicholas Day and honor multiple other saints through Christmas Day, when many Orthodox Christians attend a morning mass.

The religious Christmas season ends on January 6 with Theophania, the Feast of the Epiphany, when bodies of water throughout Greece are blessed and a cross is cast into the waters. You may see crowds of brave souls dive in after it, since the person who pulls it from the water and returns it to the priest is said to receive extra blessings in the year ahead. The following day is dedicated to St. John the Baptist, with feasts to celebrate the saint (as well as anyone named John, Joan or Joanna).

Christmas In Greece – All About the Food

In Greece, religious holidays are traditionally marked with a celebratory feast, and Christmas is one of the biggest feasts of all. The main dish is usually lamb or pork roasted on an open spit or in the oven. Popular side dishes include spinach and cheese pies, salads and other vegetables. Baklava, a pastry made of honey-soaked phyllo dough studded with nuts and cinnamon, also makes frequent appearances during the season.

In addition to the Christmas meal, Greeks enjoy a variety of special baked goods during the holidays:

While Christmas is celebrated energetically throughout the country, certain cities are well-known for their unique and extravagant holiday festivities.

With the mild Athenian climate, open-air performances and markets are near-constant occurrences during the holiday season. Watch for free concerts in Syntagma Square, street performances in Ermou, Monastiraki and Kolonaki and various bazaars throughout the city.

The arts also play a major role in commemorating the Christmas holidays, with seasonal performances of Christmas carols and ballet at the Athens Concert Hall and special exhibitions at the Cultural Center Hellenic Cosmos.

Special Christmas displays will also pop up at various venues around the city. Be sure to make time for a visit to the Stavros Niarchos Foundation Cultural Centre, famous for its holiday light displays and outdoor ice rink as well as free holiday concerts and performances. The Christmas factory at Technopolis—a former gas factory that was converted into a museum and cultural center—features a bazaar selling crafts and other gifts as well as themed play spaces and activities for children.

Of course, no Christmas would be complete without a visit with Santa; the Christmas Kids Festival in Spata and the Santa Claus Kingdom in the Mediterranean Exhibition Center in Paiania are two magical opportunities to see the man in red.

In the heart of this port city, Aristotelous Square will be decked out in Christmas lights, decorated trees, a miniature Christmas village and ice-skating rink. Each district within the city has its own Christmas market, with activities reaching their peak in the last few days before Christmas. In the Neapolis neighborhood, the “Village of Love” is designed to impart the true meaning of Christmas through creativity and humor. In the nearby suburb of Lagkadas, street entertainers like stilt walkers, clowns and elves will be out in full force to spread holiday levity.

The Christmas spirit takes the form of dancing flames in Kranohori village, located near Kanava in northern Greece. Villagers build massive pyramid-shaped bonfires around the town and come together around the “boubounes” for music, dancing and feasting.

In the northern Greek village of Drama, the town hosts a spectacular festival called “Oniroupolis,” or “Dreamland.” The seasonal celebration features a large carousel, ice-skating rink, fairground rides, a Christmas village and a huge hanging boat decorated for the holiday.

In the central city of Trikala, the “Magical Mill of the Elves” is a delightful Christmas village that includes Santa’s House, the Elves’ Post Office, Chocolate Factory, play castle and other attractions to delight visitors of all ages.

In the Macedonian region of northern Greece, residents of the town of Kastoria recreate an ancient Dionysian ritual known as “ragoutsaria.” Held from January 6-8, this feast requires celebrants to wear disguises and masks designed to scare away evil spirits. They go from house to house, knocking on doors and requesting a reward from the residents in return for cleansing the home of evil. The people of the town also come together in the streets and squares to eat, drink, dance and listen to live folk music.

Even if they don’t host an extravagant Christmas festival, the small villages and hamlets of Greece are at their most picturesque and charming during the holiday season. With snow-capped mountains and verdant evergreen forests as a backdrop, many villages’ quaint stone houses, narrow cobblestone streets and local shops look like a scene straight from a Christmas card.

No matter where in Greece you choose to spend your Christmas season, you’re guaranteed to be immersed in the holiday spirit thanks to the fascinating traditions, rich food and warm hospitality that overwhelm the country during this special time of year.