Visiting Greece In Winter: A Comprehensive Look For 2020 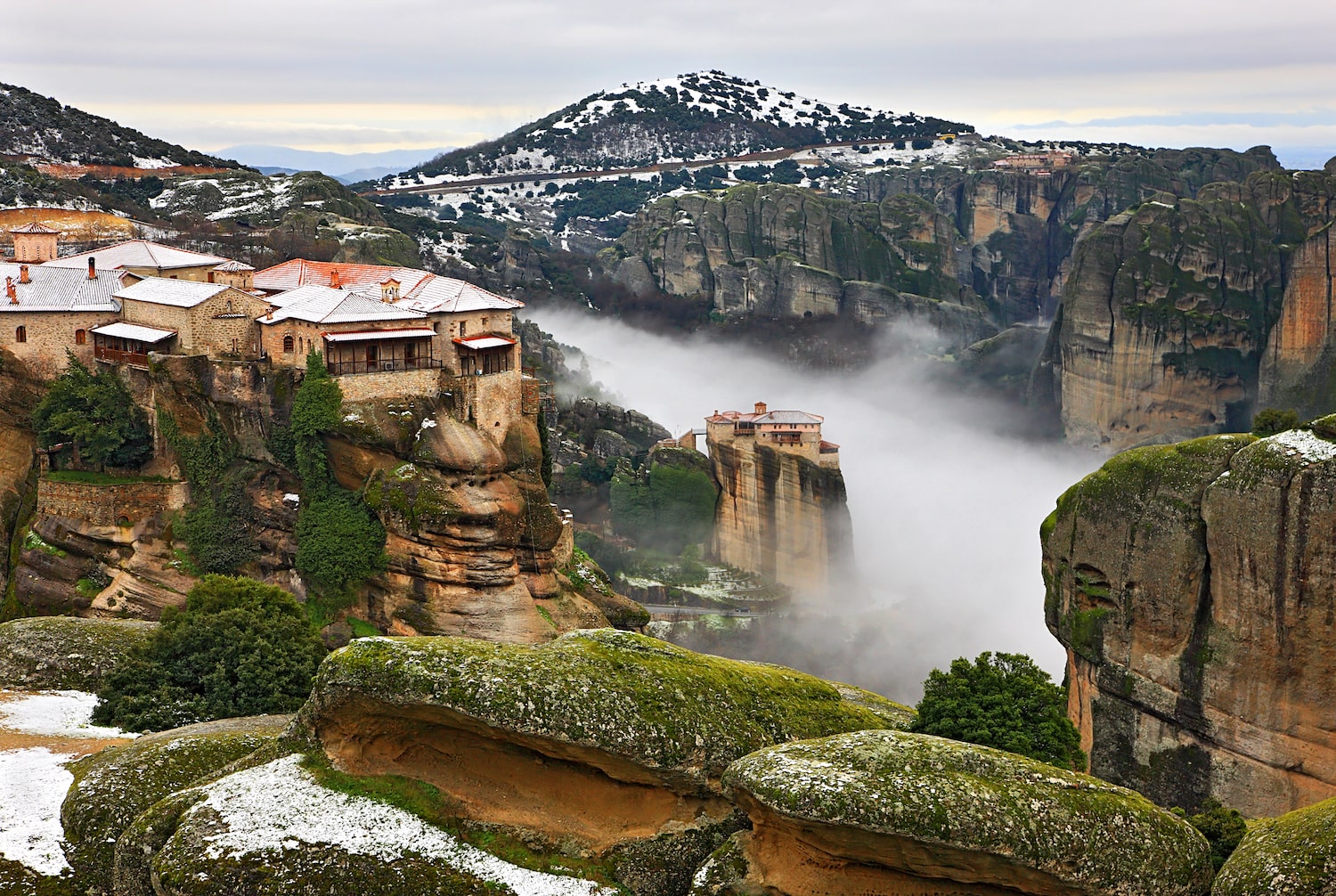 Visiting Greece in winter might sound like a bad idea thanks to all the “summer” hype the country has, but it may actually turn out to be one of the most memorable periods of your life.

Yes, spending your winter days in the popular tourist country can help you discover much more than the warmth of the summer would ever allow.

And if you’re worried about the country being freezing cold in winter, then let us tell you that the temperatures in the southern part of Greece can be as high as 18 degrees Celsius, and carrying some good warm clothes would easily allow you to explore the other parts of the country as well.

If you’re still on the fence, let us walk you through some of the best things you would experience while visiting Greece in winter as well as how it can be a more unique experience than visiting the country in summer.

Many tourists believe that Athens is the best place to be on the planet during winter. And with endless attractions in ancient sites, museums, nearby islands and more, it’s definitely the go-to choice for most tourists visiting Greece in winter to stay for a long period of time.

If you don’t already know, Athens comes to life in the winter months starting from September until the summer months. There are people all around, especially in cafes and restaurants, and you get to see and experience live musicians in the largest numbers you may have ever seen.

There’s a lot to do in Athens both during the day and the night. The days can be spent just exploring everything Athens has to offer by walking around and visiting the popular archaeological landmarks and museums. For nights, the popular options are places like Kalavrita, Delphi, Meteora, and Nafplio (the former capital of Greece). However, if you have some more time on your hands, you may want to sneak a quick trip to the Edipsos, which is one of the most unique places you will ever visit.

Many old people visit the spas of Edipsos as the town is known for its hot mineral springs and return looking much younger and rejuvenated.

Tourists find the nearby islands of Aegina, Hydra and Poros to be worth a visit as well.

Shopping in the winter months – especially during the January and February sales – is going to be a memorable experience in itself. You will also find things so cheap you will save enough to cover your airfare.

There’s a lot more to Athens that’s too much to cover in this post, but let us also just add that winter is also the best time to experience the amazing nature of Athens.

While you would find it hard to leave Athens and explore other places in the country, know that Greece does have a lot more to offer beyond Athens.

In fact, there’s a city so similar to Athens it can be termed as the second Athens of Greece. We are talking about Thessaloniki, a city which is home to a great number of archaeological sites as well, and matches the liveliness of Athens.

Then there’s also the seaside town known as Kavala, built on the slopes of Mount Symvolo and finding its place on the list of the most picturesque places in the country, with historic buildings and a feel of Greece’s true culture.

Nafplion and the Argolis

We mentioned above that Nafplion is one of the places you can visit from Athens, but let us talk a bit more about it.

It’s easily one of the most beautiful towns in Greece in winter, with a lot of history and nature. It’s also a lively town with lots of cafes and shops. It’s also easy to get to from Athens.

Talking of history, it’s hard to forget the Argolis. It showcases some of the best of the country’s history in a beautiful way, making for some mesmerizing views and a great overall tourist experience.

You would find some amazing archaeology in Myceneae and Epidavros, with Corinth and Ancient Nemea being fairly nearby too. But something that few tourists get to explore are the not-so-popular ancient cities, sanctuaries and temples.

The orange and olive fields in the Argolis are fascinating to watch as well. All in all these places make for an excellent winter visit.

Experience the Attractions in Quiet

Greece is one of the most popular options in Europe for people looking to go on a vacation in the summer months. Every attraction or landmark is crowded with tourists during these months.

However, in winter, most of these popular tourist places (except Athens) are almost completely deserted. This turns out to be a great opportunity to experience the archaeological sites and other attractions as closely and thoroughly as you want to, which may just not be possible in the summer months.

Even some of the most popular tourist attractions like Parthenon are deserted, which makes for an amazing experience and some great pictures tourists visiting in summer could only dream of.

The Most Famous Santa Claus Village!

Drama, a northeastern city of Greece, is home to what is arguably the most famous Santa Claus villages in Greece, Oneiroupoli.

It’s actually a theme park that’s spread over 20,000 square meters, and the most interesting thing about it is its Christmas heavy theme and feel.

It’s only open two months a year – December and January – but if you’re visiting Greece in winter you will have the opportunity to explore this amazing theme park.

It offers lots of things to do for children and parents, including exploring wooden houses, riding on small trains and so on.

Some of the other attractions in Drama include the Archaeological Museum of Drama, Central Square and its beautiful nature.

Greece is a paradise during winter for passionate swimmers. If you’re a skilled swimmer and do not fear some adventurous swimming environments, Athens Riviera offers plenty of options for you to choose from in its beaches.

However, if you would like to take it easy, Lake Vouliagmeni will turn out to be your best bet. It has never got colder there than 22 degree Celsius, which makes for a memorable thermal spa experience.

A Unique Greek Festival Awaits You

Tourists visiting Greece in winter are in for a pleasant surprise as it’s also the time the country celebrates one of its most unique festivals, the Epiphany. It starts on Christmas Eve and lasts until January 6th.

But that’s not all. Some areas like the Kastoria take this festival to the next level as they also start celebrating their local festival (which is Ragoutsaria for Kastoria) right on the day when Epiphany starts.

You see some unique Greek culture during these days with the locals dancing on the streets in some of the most unique costumes you may have ever seen. The celebrations find their peak point on January 8th where the Doltso Square witnesses large crowds that battle in a sing-off, followed by parties and celebrations in almost every part of the city.

Tourists visiting Greece in winter enjoy a lot of special advantages over the ones that visit the country in summer, and the skiing and snowboarding centers are one of them.

Arachova and Kalavryta in Peloponnese are some of the most popular options here. However, if you would like to go chasing the ancient Greek gods, then you would want to head straight to the Elatochori Ski Center. It’s located on the northern slopes of Mount Olympus.

You are in for some fascinating views from the altitude of 1,450 meters. There are six ski trails that offer an adventure in themselves as they are spread over ten kilometers long. What’s more, there’s also a track for snowboarding!

Experience Some Mythology in Mount Pelion

Many Greeks still believe that Centaurs used to live in Mount Pelion. It’s also believed that these Centaurs taught the Greek heroes the arts they are known for.

And while that might seem a bit too much to digest, you would feel there’s something mythical in the air and the environment when you’re there.

In addition to its mythical feel, Mount Pelion offers a lot more, including 24 beautiful villages, amazing waterfalls, lots and lots of greenery and the best the nature has to offer.

You would also have the option of staying in a traditional mansion, which would make you feel you have stepped into a totally different world and live through the history of this mysterious Greek place. Don’t forget to carry your warm clothes though, as it can get pretty cold out there.

Meet a Different Version of the Greek Islands

Many of the islands you visit in the country in summer are actually in their “compromised” form. If you want to see them at their true self, winter is the time to visit them.

The time is perfect with the locals going back to their normal lives, and the ever-changing skies making every scene unique and breathtaking.

Now, although the options are virtually endless, if you want a complete island experience and not land on an almost completely deserted island, you would only want to pick from the bigger islands like Corfu, Crete and Evia.