Our Most Effective Crete Itinerary: 5 Days of Beauty 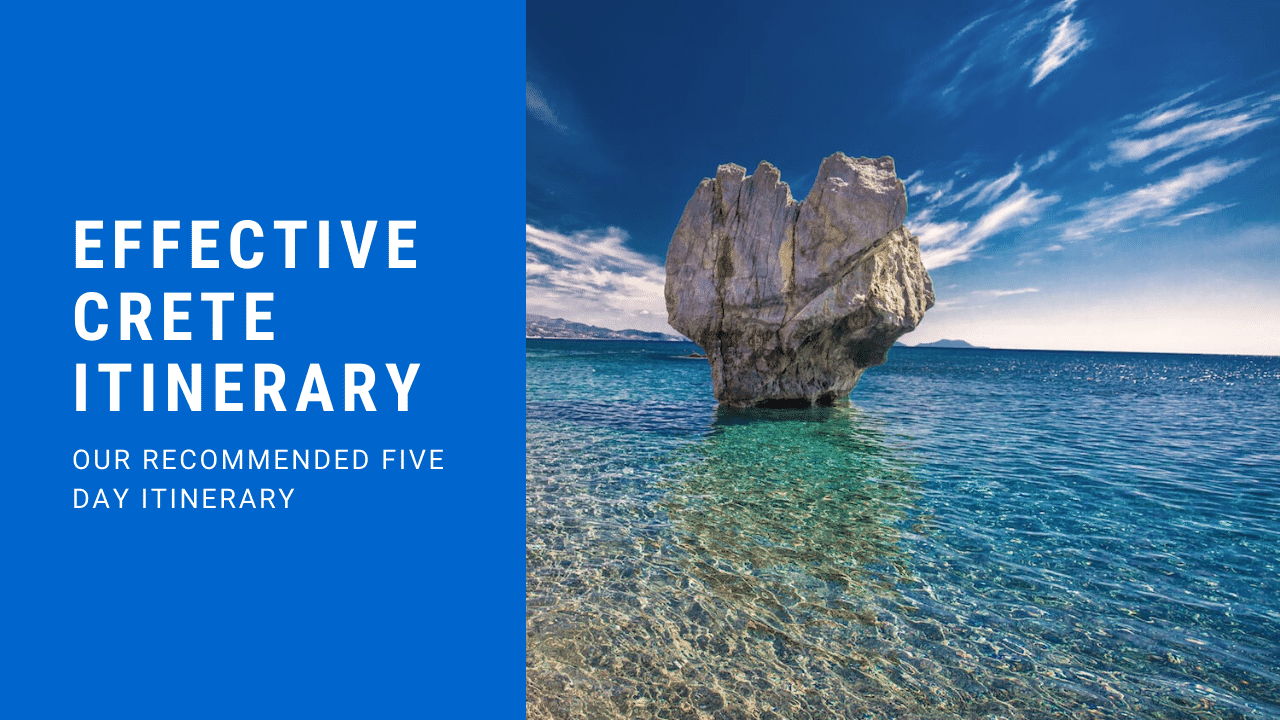 As Greece’s largest island, Crete offers visitors an almost endless array of things to do and places to see. You could easily spend weeks there and only scratch the surface, but if your trip allows you five days on this culturally and aesthetically blessed island, the Crete itinerary below can help guide your planning for a truly unforgettable vacation.

Before you go, give some thought to how you prefer to get around the island. Many of the larger cities are walkable, but you’ll need some way to travel between metro areas and smaller villages. Renting a car gives you the most flexibility, but it can also be somewhat costly, especially if you require a vehicle with automatic transmission. You can also use taxis, but be aware that they’ll be both very expensive and in high demand during the busy summer season.

The public bus system on Crete is a surprisingly reasonable option for getting around, especially if you stick primarily to the major cities on the western side of the island. Intercity buses run hourly and are generally on time, and you can pay fares with your debit or credit card.

If you fly into Crete, you’ll likely arrive in capital city Heraklion, where the second-busiest airport in Greece is located. Flights arrive daily from Athens and Thessaloniki all year, and during the summer many European airports also offer flights into Heraklion International Airport.

The city also maintains a busy port, with daily ferries from Athens year-round and weekly summer connections to Santorini, Mykonos, Rhodes and several other islands in the Cyclades and Dodecanese.

Assuming you’ve entered Crete via Heraklion, it’s a perfect place to spend your first day on the island, and your first stop should be the famed Minoan Palace of Knossos. At a sprawling 20,000 square meters, this remarkably well-preserved ancient structure was initially constructed in 2,000 B.C. but leveled by an earthquake 300 years later. An even grander and more complex palace was immediately erected in its place, and it’s the remains of this grand work of architecture that remain on the site today.

The palace is closely associated with the legend of the Minotaur, a terrifying man-bull hybrid trapped in a labyrinth by Crete’s King Minos. Ultimately, the mythical hero Theseus solved the labyrinth and slayed the beast.

Knossos is also well-known for its distinctive red columns, which remain mostly standing even after centuries of war, fires and other natural and man-made disasters. Fragments of intricate frescoes are still visible on many of its walls, and the remains of the Throne Room still contain an alabaster throne, gypsum benches and a ceremonial purification basin.

To complement your visit to the ruins, try to squeeze in a visit to the Heraklion Archaeological Museum, where many of the relics and other items excavated from the palace are preserved. Combination tickets to both locations are available, which can save you a bit of money and secure your spot at both popular destinations.

If it fits your budget, try to get a reservation at the newly-constructed five-star Legacy Gastro Suites hotel, where you can also enjoy a fantastic gourmet meal at the hotel’s rooftop restaurant. The sleek, modern Olive Green Hotel is another excellent option, with its emphasis on eco-friendly operations and high-end amenities.

On your second day on Crete, you’ll leave behind the bustling streets of Heraklion and head west to Rethymno, a quieter, more relaxed city with an equally rich history. Rethymno’s elegant architecture and charming, narrow alleyways reflect the strong Venetian influence on the city’s culture, providing unforgettable sightseeing and photography subjects.

A stop at Fortezza should definitely rank high on your must-see list. Built by the Venetians in the 16th century to defend the city against bands of Turkish pirates, this stone-walled fortress offers spectacular views of the city and the harbor. The fort is also home to several of the city’s most picturesque and houses of worship, including the Ibraham Han Mosque, the Bastion of Santa Maria and the Orthodox church of Agios Theodoros Trichinas.

If you’re drawn to architecturally striking churches, consider stopping by the Holy Monastery of Arkadi, which holds particular significance in the island’s history. Located about 15 miles southeast of the city center, the monastery is fortress-like in its appearance and was critical in the Cretans’ fight for independence from the Turks in the late 19th century.

On your third day in Crete, you’ll spend most of your time relaxing and soaking up the sun. The region surrounding Rethymno is studded with beautiful beaches, from the well-organized and crowded to the more rustic and remote. You can swim in the warm, brilliant turquoise waters of the Sea of Crete, participate in water sports like diving and windsurfing or simply sunbathe on the soft, golden sand. Some of the best beach destinations in the area include:

On your fourth day on Crete, you’ll continue your trek westward to the region of Chania, where the island’s capital city was once located.

While there are dozens of fascinating landmarks in Chania—we’ll get to those in a moment—we recommend spending most of your time in Old Town Chania simply exploring the small local shops and sampling the offerings at its wonderful cafés, tavernas and bakeries, many of which are located along the busy harbor.

At the end of the pier, you’ll come across the Venetian lighthouse, widely considered to be a symbol of the region. Its unusual rectangular structure dates back several centuries, and it’s especially beautiful at night, when its tower is illuminated and reflects off the harbor.

Also located along the harbor front is Firkas Fortress, erected by the Venetians in 1629 as the city’s primary defense against invaders, although it was eventually overtaken by the Turks until 1913, when Crete joined the nation of Greece. Today, the fortress houses the Maritime Museum of Crete, where visitors can see a broad range of nautical objects such as antique navigation tools, intricate model ships, paintings and artifacts. The site also provides a stunning view of the harbor and surrounding city.

To get a glimpse of Chania’s vibrant culture, make a detour to trip to the Municipal Market of Chania, a century-old covered marketplace where vendors sell all manner of traditional Cretan products, including meat, fish, cheeses, olives and spices as well as souvenirs and handmade goods. The bustling “agora” was declared a protected monument in 1980.

The Samaria Hotel, a four-star property in the heart of Old Town Chania, oozes modern class. It’s walking distance to the Venetian harbor and the commercial center, and its freshly-renovated rooms and luxurious pool and fitness center are sure to rejuvenate your mind and body after days of traveling.

While relatively close to Chania, Balos Lagoon and beach are a bit challenging to reach but well worth the effort. With its crystal turquoise waters, pink-tinged sand and dramatic rocky cliffs, Balos is easily the island’s most photogenic beach, so it’s not surprising it was once a favorite destination of Britain’s Prince Charles and Princess Diana.

Unlike the royals, who visited Balos on their private yacht, you’ll need to take a ferry from Kissamos. If you’re lucky, you may see schools of playful dolphins racing alongside your boat as you slice through the sapphire sea. Once you arrive, you’ll have the day to spend taking spectacular photos, swimming and snorkeling in the warm, shallow water and strolling the soft sand beaches. Spending your last few hours on Crete surrounded by this unparalleled natural beauty is sure to provide memories you’ll treasure long after your five-day Cretan escape comes to an end.